Who doesn’t love taking pictures of flowers? They are like nature’s fashion models, after all. That, and I believe they have magic powers — or at the very least some kind of hallucination drug — that make you believe you’re an actual photographer when you’re taking a picture of one. 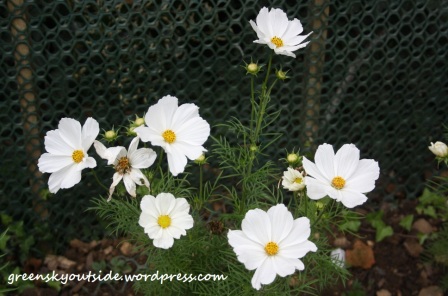 The flower’s aren’t mine, sad to say, but my friend’s — well, my friend’s family’s. It’s from their back garden, actually. They have such pretty flowers, and I don’t know if it’s the cool, fresh air or just my eyes playing on me, but the flowers here in England are much nicer than the flowers in the Philippines. The colours are more vivid, for one thing. And for another, it seems British people are more into gardening than most Filipinos — well, just my grandparents, at any rate.

Unfortunately, my vast knowledge of the world does not include the names of particular flowers, so I don’t know what these ones are called. For all I know, they could be weeds. I doubt they are rare breeds or anything like that, but you’ve got to admit they are pretty.

Oh, and just for fun, here’s a little verse I found about flowers. It’s not the entire poem, so if you want to read it you’ll have to follow this link.

I will be the gladdest thing
Under the sun!
I will touch a hundred flowers
And not pick one.

Because sharing isn't just for kids in kindergarten: